Pollock fish is a whitefish, with delicate flesh, and feels light and flaky when eaten. It is one of the top five fish species that is caught and distributed in the USA.

There are a variety of ways to prepare pollock fish for consumption. They could be prepared as fish sticks or fish fillets. They could also be added as ingredients in ceviche or other protein-rich salads.

A major advantage of pollock fish is that it has one of the lowest mercury levels amongst commercial fish varieties.

Below are various health benefits of pollock fish;

All types of fish are nutritious but fatty ones are considered better. That’s the reason why fatty fish like pollock have high concentrations of nutrients. As a matter of fact, pollock fish is packed with higher concentrations of nutrients when compared to other types of fish. Including this fish as part of your family’s diet would guarantee high levels of vitamins, iodine, and proteins. Pollock fish also contains the fat-soluble vitamin D. Most people lack this vitamin which works like a steroid when in your body. With this fish as part of your diet, you should expect higher body levels of omega-3 fatty acids. These fatty acids are building blocks for brain functionality and general body development
(https://ndb.nal.usda.gov/ndb/foods/show/15067)

2. Reduces The Risk Of Cardiovascular Diseases And Lowers Cholesterol Levels

The ability of nutrients, found in pollock fish, to improve cholesterol and protect people from heart diseases is well documented. The presence of high levels of vitamin B6 and B12 in the fish helps the body regulate homocysteine levels which is an amino acid that increases the risk of developing heart diseases. Pollock fish is also packed with high levels of selenium which reduces the likelihood of having cardiovascular diseases. This implies that the more selenium you have in your body, the lower the chances of having coronary heart diseases.
(https://www.ncbi.nlm.nih.gov/pmc/articles/PMC3215994/)

3. A Good Diet For Weight Loss

If you are observant, you would find out that most weight loss diets contain fish. This is for a good reason. Scientific research shows that fish oil has the capacity to lower body fat mass which decreases fat to muscle ratio in your body. With a high concentration of proteins, vitamin B6, and B12, pollock fish is a good source of energy with the capacity to serve as an energy-giving food, thus, reducing your urge to consume carbohydrates. This makes pollock fish an effective way to lose weight. You get more muscles as compared to body fat. There are two fatty acids which play a prominent role in achieving this benefit. The two are DHA (docosahexaenoic acid) and EPA (eicosapentaenoic acid). A study conducted in 2016 found that school-going children who were obese lacked or had very low levels of EPA in their blood. These fatty acids can be easily supplied by pollock fish.

Fertility is important to both genders; male or female. Pollock fish is packed with nutrients which help promote conception and fetal development. In men, niacin which is found in high concentrations in pollock fish can prevent erectile dysfunction, one of the most common fertility issues in men. The fatty acid, known as DHA, found in pollock fish, helps to increase the production of healthy sperm which increases the probability of conception. Omega-3 fatty acid, found in pollock fish, can reduce infertility and also help women in achieving balanced menstrual cycles. Scientific evidence is also available to prove that omega-3 fatty acid can treat polycystic ovarian syndrome and endometriosis. The two of these are known causes of infertility. Selenium can also help prevent miscarriages in women.

Pollock fish also has the potential to prevent and counter cancer-causing cells from developing within your body. This capability is due to the high concentration of omega-3 fatty acid; an agent associated with lowering the risk of developing colon and prostate cancer. Riboflavin, also known as vitamin B2, is a powerful antioxidant found in pollock and has the capability to inhibit the development of cancer cells.

Pollock fish contains high levels of phosphorus; a mineral which is responsible for helping control emotional, hormonal, and neurological responses. If this mineral is inadequate in your body, it could trigger age-related cognitive decline which could result in diseases like Alzheimer’s and dementia. It is also scientifically proven that proteins found in pollock are important for converting energy and enhancing focus.

Riboflavin, otherwise known as vitamin B2, is responsible for mood improvement. Riboflavin, a vitamin with the capacity to protect against memory decline is also used in the treatment of dementia and Alzheimer’s disease, thus, underlining the importance of pollock to brain development.
(https://www.ncbi.nlm.nih.gov/pmc/articles/PMC5639249/)

Owing to its high concentration of Vitamin B, pollock fish can be included in a diet to help treat anemia. The presence of vitamin B2 makes this possible since it can be applied in steroid hormone synthesis process as well as being useful in circulating oxygen to various cells in the body. This vitamin can also reduce homocysteine levels which are associated with the development of anemia.

Scientific evidence shows that inflammations are the causes of several diseases. For this reason, it is very important for people to adhere to diets which can reduce inflammations in the body. Products like processed sugar shouldn’t be part of your diet. Instead, substitute them with anti-inflammatory foods like pollock fish. Pollock fish contains high levels of niacin, Omega 3, and vitamin B6, all of which combat arthritic pain. Science has also proven that vitamin B12, a constituent found in pollock fish, can be used in treating migraine headaches.

Doctors advise diabetic patients to adopt a high protein diet together with foods containing high levels of omega-3 fatty acids. Pollock fish offers the above nutrients in high concentrations. Omega 3 aids in combating diabetic complications such as vision-related problems and cognitive defects while a high protein diet curbs the likelihood of being obese.
(https://www.ncbi.nlm.nih.gov/pmc/articles/PMC4216999/)

We all want to have radiant skins! Pollock fish helps maintain healthy and young-looking skin in several ways. The presence of omega 3 in our bodies maintains an elastic skin which in turn prevents the formation of wrinkles. Low levels of EPA and DHA could make our skin more susceptible to conditions such as eczema, psoriasis, hair thinning, sun spots and dandruff. Collagen is responsible for skin elasticity. Vitamin B2 aids in the formation of collagen. Therefore, by consuming foods rich in Vitamin B2, like pollock fish, you help your skin heal quickly, dry less, as well as remain young and radiant.

14. Promotes The Growth Of Hair

Riboflavin also aids in the formation of tissues that maintain healthy hair. It achieves this by combating dryness, redness, and inflammation.

Riboflavin, also known as vitamin B2 is a powerful antioxidant found in pollock and has the capability to improve the body’s immunity. This vitamin is also beneficial to the digestive system since it maintains the linings of the digestive tract which harbors a big part of the body’s immune system. Without vitamin B2, your body would not be in a position to adequately absorb nutrients, a condition linked to weak immune systems.

Word Of Caution
Eating pollock fish could trigger an allergic reaction to this particular fish. Fish allergies could be avoided by not eating a particular type of fish. Some symptoms of fish allergies include; skin inflammation, nausea, vomiting, swelling of the throat and/or mouth, difficulty breathing, as well as death. 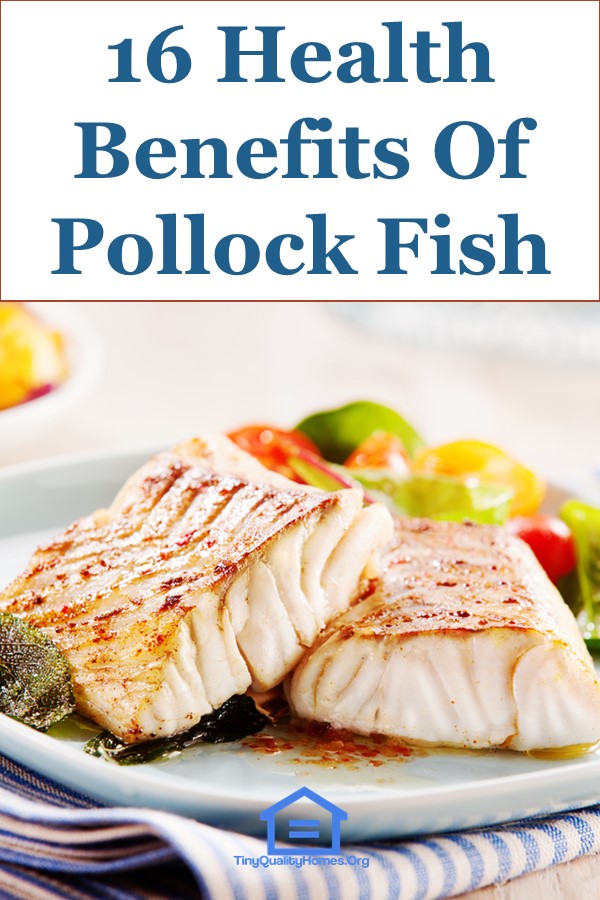