Coffee is a brewed beverage that is prepared from roasted coffee beans. The coffee plant is native to Sudan and Ethiopia. It’s origin also stretches to regions like Comoros, Mauritius, and Madagascar.

Coffee was first recorded as a beverage over 500 years ago in the Arabian peninsula. However, there are speculations that its consumption, as a stimulating drink, dates back to over 1000 years ago amongst ancient civilizations.

There are different varieties of the coffee plant but the most commonly used coffee plant, that is grown for its coffee beans, is the Coffea arabica.

Coffee has numerous health benefits. The benefits include; improving cognition and alertness, boosting one’s energy, helping in weight loss, reducing the likelihood of having diabetes, liver protection, and protection from certain types of cancer.

Below are various health benefits of coffee;

One cup of coffee contains up to 1.8 grams of fiber. Total dietary fiber intake should be 25 to 30 grams a day. As such, coffee contributes to your total daily fiber intake.
(https://www.ncbi.nlm.nih.gov/pubmed/17295507)

Research suggests that individuals who consumed at least four cups of coffee each day had a 22% less risk of having diabetes. Furthermore, research led by Harvard’s Dr. Frank Hu demonstrated that the risk of type II diabetes diminishes by 9% for everyday coffee drinkers. Decaf coffee diminished risk by 6%.
(https://www.ncbi.nlm.nih.gov/pubmed/22497654)

Numerous studies have shown that coffee consumption lowers the risk of early onset of Alzheimer’s disease. Studies have also shown that coffee can inhibit brain inflammation, especially the adenosine receptors, which tend to cause cognitive decline.
(https://www.ncbi.nlm.nih.gov/pubmed/20182054)

A 10-year study of 86,000 female nurses showed a reduced risk of suicide in the coffee drinkers amongst them. Another investigation, carried out by the Harvard School of Public Health, found that ladies who drink at least some coffee were 20% less susceptible to the symptoms of depression.
(https://www.ncbi.nlm.nih.gov/pmc/articles/PMC3296361/)

Recent research has discovered a compound in coffee that may work with caffeine to inhibit Parkinson’s disease. Furthermore, research from Sweden uncovered that drinking coffee diminishes the risk of Parkinson’s disease even though genetic issues may be a factor.
(https://www.ncbi.nlm.nih.gov/pubmed/20182024)

Korean researchers found that people who take 3 to 5 cups of caffeine on daily were less likely to develop heart disease. Furthermore, drinking coffee has also been linked to a lower risk of coronary heart diseases in women.  However, hypertensive patients with uncontrolled blood pressure should avoid consuming large doses of caffeine.
(https://www.ncbi.nlm.nih.gov/pubmed/29276945)

Research shows that drinking no less than four daily cups of coffee might help inhibit symptoms of MS. This suggests that the coffee prevents neural irritation which usually leads to the illness.
(https://www.ncbi.nlm.nih.gov/pubmed/26940586)

Coffee can help minimize the chances of developing colorectal cancer by 26%. This defensive advantage increases with increased consumption of coffee. A Harvard publication suggests that “People with colorectal cancer (CRC) who drank at least four cups of coffee per day after their diagnosis had a significantly lower risk of early death—from either their cancer or any cause—than those who didn’t drink coffee”.
(https://www.hsph.harvard.edu/news/features/coffee-colorectal-cancer/)

10. Coffee Can Improve Energy Levels And Make You Smarter

Coffee can enable individuals to feel less exhausted and increase vitality levels.
This is on the grounds that it contains a stimulant called caffeine, which is the most commonly consumed psychoactive substance in the world. After you drink coffee, the caffeine is assimilated into the bloodstream. From there, it goes to the brain. In the brain, caffeine hinders an inhibitory neurotransmitter called adenosine. At the point when that happens, the measure of different neurotransmitters like norepinephrine and dopamine really increases, prompting upgraded termination of neurons.
(https://www.ncbi.nlm.nih.gov/pmc/articles/PMC3738453/)

12. There Are Useful Nutrients In Coffee

13. Coffee Can Fight Depression And Make You Happier

Despondency is a genuine mental issue that causes a significantly diminished quality of life. Coffee has an anti-depressive effect due to its caffeine content. Caffeine is a psychostimulant that can improve motivation and wakefulness.

14. Coffee Is The Biggest Source Of Antioxidants In Western Diet

For individuals who eat a standard western diet, coffee may really be the most advantageous part of your meal. In general, beverages are a much bigger source of antioxidants in the western diet than typical foods. The majority of these antioxidants come from tea and coffee.
(https://www.ecowatch.com/coffee-the-worlds-biggest-source-of-antioxidants-1882083188.html)

15. Coffee Helps One To Live Longer

Given that caffeine consumers are less susceptible to various ailments, it suggests that coffee could be a positive factor to longevity. There are numerous longitudinal studies that show that coffee consumers have a lower risk of death due to natural causes. A study found that “drinking coffee, even more than 8 cups a day, was linked with a lower risk of death within a 10-year follow-up period. However, the researchers stressed that the study only found an association with coffee and longevity and didn’t prove that coffee leads to a longer life.”
(https://www.livescience.com/62970-coffee-risk-of-death.html)

16. Coffee Reduces Likelihood Of Heart Disease And Lowers The Chances Of Stroke

It is frequently asserted that caffeine can build pulse. This is valid, yet the impact is little (3-4 mm/Hg) and often requires that you drink coffee daily. Research also shows that women who drink coffee have a decreased risk of having coronary diseases. Other studies further show that coffee consumers (of 4 cups or more per day) have a lower risk of having a stroke.
(https://www.ncbi.nlm.nih.gov/pmc/articles/PMC3526718/)

Coffee can protect your teeth by inhibiting the activities of bacteria such as Streptococcus Mutans. Different studies have corroborated the inhibition of harmful dental bacteria by coffee. In studies, dark coffee produced the most potent bacteria inhibition effects. These studies suggested that additives, such as sugar or syrup, basically reduced the antibacterial properties of dark coffee.
(https://www.ncbi.nlm.nih.gov/pmc/articles/PMC2848806/)

Have you at any point ‘energized yourself’ with a coffee before hitting the weights? Assuming this is the case, there is good news: the advantages of coffee don’t end in the weight room. Various studies have demonstrated that coffee can diminish the effects of muscle pain during and after exercise!
(https://www.ncbi.nlm.nih.gov/pubmed/17161977)

A few studies show that caffeine can diminish blood flow to the brain. One of these studies concluded that caffeine decreases cerebral blood stream by about 27%. This is a major difference between illicit stimulants and coffee as illicit psychostimulants cause a rush of blood to the whole brain, caffeine actually restricts blood flow overall. However, coffee leaves individual parts of the body more stimulated with increased blood circulation. Coffee also increases neuronal activities making us more alert.

None of this additional vitality and enhanced mental execution, due to coffee consumption, would be any good if your memory couldn’t keep up. One study shows that caffeine enhances memory as well as awareness and attentiveness. Furthermore, different researches have shown that caffeine can positively affect short-term recall. Coffee improves both short-term as well as long-term memory.
(https://www.ncbi.nlm.nih.gov/pmc/articles/PMC5107567/)

Coffee can help lower the risk of incident gout in men. Gout is a form of arthritis that is caused by excess uric acid in the bloodstream and could lead to joint pains. Gout often initially affects one’s big toe. However, it also causes swelling and agony in different joints of the leg. A study found that coffee, not simply caffeine, could diminish the symptoms of gout in men, by bringing down levels of uric acid in the blood.
(https://www.ncbi.nlm.nih.gov/pubmed/17530645)

People who drink no less than two cups of coffee daily are half less likely to get gallstones. There is evidence that coffee triggers the contraction of the gallbladder. It appears likely that caffeine is largely responsible for this property of coffee since consumption of decaffeinated coffee is not linked to a reduced risk of developing gallstone in numerous studies.
(https://www.coffeeandhealth.org/hcp-resources/gallstones-and-gallbladder-function/)

24. Reduces Symptoms Of Headache And Asthma

Research demonstrates that general drinking of coffee could help reduce symptoms of asthma and headaches. Caffeine is very similar to theophylline. Theophylline is a bronchodilator drug that is taken by asthmatic patients to reduce symptoms of asthma such as coughing, wheezing, and breathless. Also, coffee helps relieve migraine and headaches. In fact, caffeine is an ingredient in numerous pain relievers.
(https://www.ncbi.nlm.nih.gov/pubmed/3396420)

Coffee prevents retinal damage; this is due to the presence of potent antioxidants in coffee. Research has shown that caffeine administration prevents retinal neuroinflammation and loss of retinal ganglion cells in animal models of glaucoma.
(https://www.ncbi.nlm.nih.gov/pmc/articles/PMC4897621/)

Side Effects Of Coffee

Side effects of drinking coffee in regular excess quantity include; 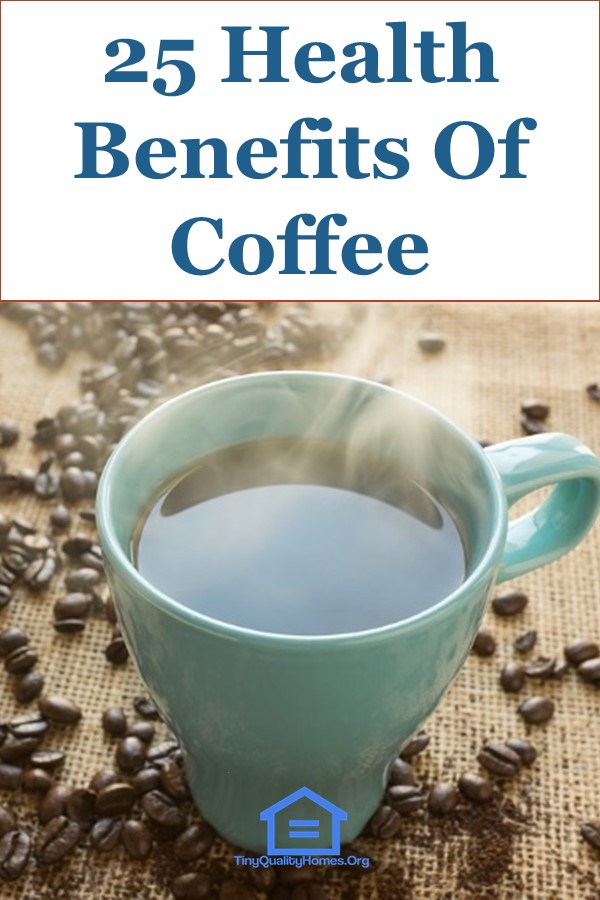